NOTICE: All Must Wear Masks in Patient Care Areas

We Are Living Hope: Trinh Dang 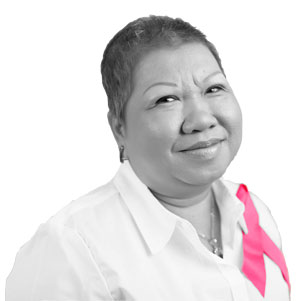 Trinh had never had a mammogram. She had her first one on a Tuesday in October and was called back in on the following Friday to have another since the Women’s Imaging Center thought they had found something. On the Monday after that, not even a week after her very first mammogram, Trinh was diagnosed with stage two breast cancer.

“I was worried about my kids and my husband,” Trinh said. “I handle the bills and the cooking.” Trinh said she did not have time to be sick and she did not want anyone who looked at her to know she was. She continued to work every single day throughout her chemo and radiation.

She was thankful for the way she was treated by Dr. Ezekiel, Dr. Gill, Dr. Chase and Dr. Frei.

Trinh did not want any of her friends or family to end up like her, so before she had her mastectomy, she had them feel her breast just so they would know what it feels like when they do their own self-breast exams. She preached about performing self-breast exams no matter how young or old you are. “I was told you weren’t supposed to get mammograms until you were 40. I don’t want someone younger than me to find out they have cancer when it is too late.”

Trinh is thankful to her second family at ARMC Cancer Care Institute and to all of her supporters and friends: Happy, Nhan, Kim, Hoa, Sonya, Cindy and to her husband Chau and kids.